The New Republic: David Greenberg: 'JFK Was An Unapologetic Liberal '


"In the fiftieth anniversary of John F. Kennedy’s assassination, the hype—the movies and books and magazine covers, the roundups and reminiscences and retrospectives—is in overdrive. How can America resist another JFK love-in? The popular adoration of Kennedy, five decades on, puzzles pundits and historians, who note, correctly, that he neither led the nation through war nor racked up a legislative record on par with that of Woodrow Wilson, Franklin Roosevelt, or Lyndon Johnson."
From The New Republic
“What do our opponents mean when they apply to us the label, “Liberal”? If by “Liberal” they mean, as they want people to believe, someone who is soft in his policies abroad, who is against local government, and who is unconcerned with the taxpayer’s dollar, then the record of this party and its members demonstrate that we are not that kind of “Liberal.” But, if by a “Liberal,” they mean someone who looks ahead and not behind, someone who welcomes new ideas without rigid reactions, someone who cares about the welfare of the people – their health, their housing, their schools, their jobs, their civil rights, and their civil liberties – someone who believes that we can break through the stalemate and suspicions that grip us in our policies abroad, if that is what they mean by a “Liberal,” then I’m proud to say that I’m a “Liberal.” [Applause.]
But first, I would like to say what I understand the word, “Liberal,” to mean and explain in the process why I consider myself to be a “Liberal,” and what it means in the presidential election of 1960.
In short, having set forth my views – I hope for all time – 2 nights ago in Houston, on the proper relationship between church and state, I want to take this opportunity to set forth my views on the proper relationship between the state and the citizen. This is my political credo:
I believe in human dignity as the source of national purpose, in human liberty as the source of national action, and the human heart as the source of national compassion, and in the human mind as the source of our invention and our ideas. It is, I believe, this faith in our fellow citizens as individuals and as people that lies at the heart of the liberal faith, for liberalism is not so much a party creed or a set of fixed platform promises as it is an attitude of mind and heart, a faith in man’s ability through the experiences of his reason and judgment to increase for himself and his fellow men the amount of Justice and freedom and brotherhood which all human life deserves…
From the JFK Library
"JFK accepting the Liberal Party nomination in 1960.
the last freely democratically elected president of the 20th century. possibly the last ever.
I acquired this recording from a "public domain" site and present it here as an example of what our shared history is in these united states.
The speech it is in its entirety as an historical record.
As far as I can check the history, from independent transcripts of the event etc. this is the full version and has not been altered.
it is offered here for your consideration.
make up your own minds." 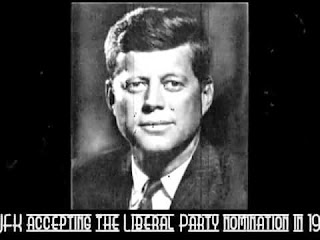 Source:John F. Kennedy- accepting the New York State Liberal Party nomination for President, in 1960.
From John F. Kennedy
JFK in a video from 1960 when he was running for President of the United States as U.S. Senator John F. Kennedy, gave a speech at the New York State Liberal Party convention defining liberalism and what liberalism is to him. And a couple of things from this speech that partisan right-wingers who like to view him as a Conservative and so-called Progressives (who are really closeted Socialists) who are in love with the welfare state (perhaps make love to it) and based most of their politics around what the Federal Government can do for people should take from this speech. Which will be on this blog and that you can find for yourself on YouTube.
For right-wingers he was saying why he was a Liberal and what liberalism isn’t. Which should be enough evidence for them if that is what they are interested in seeing, instead just trying to score political points off it, as well as with his administration.
And for the let’s say today’s so-called Progressives (who are actually closeted Socialists) when you see this video about how Jack Kennedy felt about his liberalism and liberalism in general, they should know, again if they are interested in facts and not just scoring political points, from JFK while he was in Congress or as President of the United States, wasn’t as far to the Left for them when it came to economic or foreign policy.
Democratic Socialists (to be real)  like to partially quote Jack Kennedy’s speech from 1960 on liberalism. And they only use the part where he says: “If being a Liberal is someone who cares about the welfare of others, their education, housing, health care, their economic security” (to use as examples) then he meaning JFK is a Liberal. And they use this one part of a much larger speech. And David Greenburg of The New Republic whose column today in The New Republic that you can read by clicking the link on this blog, his column was no different.
Today’s Democratic Socialists (not Communists) use it to make the case that JFK was a Liberal. But in the way that Social Democrats see liberalism and Liberals, people who believe that it is the job of government to look after people and take care of people and that is how you secure freedom for everyone. Instead of empowering people to be able to make their own decisions and be able to take care of themselves. Which is the real definition and version of economic liberalism: using government to empower those who need it in order to be able to take care of themselves.
I’ll just layout the other half of what Senator Kennedy said about liberalism from 1960, which again you can see by viewing the video from this blog. Senator Jack Kennedy said:
“That if being Liberal is about being soft abroad, or being Liberal is about being against local government and local control, or being Liberal is someone whose not concern with people’s tax dollars”, then I’m not a Liberal.” So there goes the social democratic version of JFK that today’s so-called Progressives or so-called Modern Liberals and how JFK was not that type of Democrat. Now here is the liberal version of Jack Kennedy and how he described his own Liberals:.
“If a Liberal is someone who looks forward and not behind, who welcomes new ideas, cares about the welfare of others, then I proud to be a Liberal”. But most people on the Left care about the welfare of others, because most leftists have a role for government when it comes to the economy. Because they do not want a small percentage of the country controlling so much of the wealth.
President Kennedy did not govern as someone who had a new government program or expansion of a current government program to meet most of it not all the economic and personal needs of people in the United States. He wanted government to be there to help people who needed it, but also to help them be able to help themselves.
Senator Kennedy also went on to say in his 1960 speech about liberalism: “That being Liberal is not about being in favor of a superstate, or being in favor of government force when voluntary action will do to solve our problems in society”.
JFK was in favor of a strong effective Federal Government to so the things that we needed it to do. Not to try to run people’s lives for them. That government should be there to help people in need be able to help themselves. And meet the national security, law enforcement, equal rights protections meaning civil rights challenges, as well as foreign policy concerns of the country. That is what liberalism was to him, as well as myself. And what liberalism actually is and not how it has been successfully stereotyped by the right-wing and use to run with by the New-Left.
You can also see this post at FRS FreeState, on WordPress.

You can also see this post at FRS FreeState, on Blogger.
Posted by Erik Schneider at 3:10 PM