When public housing became part of the LBJ Great Society in the late 1960s, it was created with the best intentions in the world to give low-income people, who otherwise would not have been able to afford a home, a place to stay, and to that extent public housing has been very successful in America and has prevented millions of people and families from being homeless and otherwise putting pressure on our already overcrowded private homeless shelters.
But public housing in America has had major drawbacks as well, forcing low-income people to live on top of each other in rundown housing projects in rundown neighborhoods in highly impoverished areas with high crime rates, forcing people to live in ghettos with no hope of making a better life for themselves and their families and forcing their children to attend bad schools and face the same future as their parents, even if they managed to finish school.

I would like to literally tear down every rotten housing project in America, move the residents out to better homes, and then proceed to tear down the housing projects in every rundown neighborhood in America and rebuild those properties to attract businesses for job creation--something constructive.
Then I would like to transform the current public housing authorities in America into an independent nonprofit national organization whose sole purpose would be to provide affordable housing to low-income people. This organization would be independent of the Federal Government, again with its own management, board of directors, finances, and budget.
Then I would like to stop all housing projects from being built in bad neighborhoods and give low- income people the option of living in middle class neighborhoods, where all of the new housing projects would be built.  They would be decent places to live, with the infrastructure of a decent neighborhood, schools, grocery stores, parks, etc. so low-income and their families could experience something other then poverty, crime, and rotten schools.
Since this national organization for public housing would no longer be operated by the Federal, State, or local governments, it would need its own revenue source. I would finance this by its residents and their employers each chipping in, let's say, 50% of the residents'  welfare payments, unemployment insurance, disability insurance, or Social Security, and then be eligible for a housing voucher to cover the other part of their housing costs. People who receive housing assistance wouldn't have to live in public housing but could use that money to live in private housing but be responsible for the costs that their housing assistance doesn't cover.
We need to take a better look at how we help people in poverty and actually do what's in their best interest instead of just writing checks and hoping their problems go away.  We need to use public assistance to empower people to improve their lives and become self-sufficient so they no longer need public assistance. 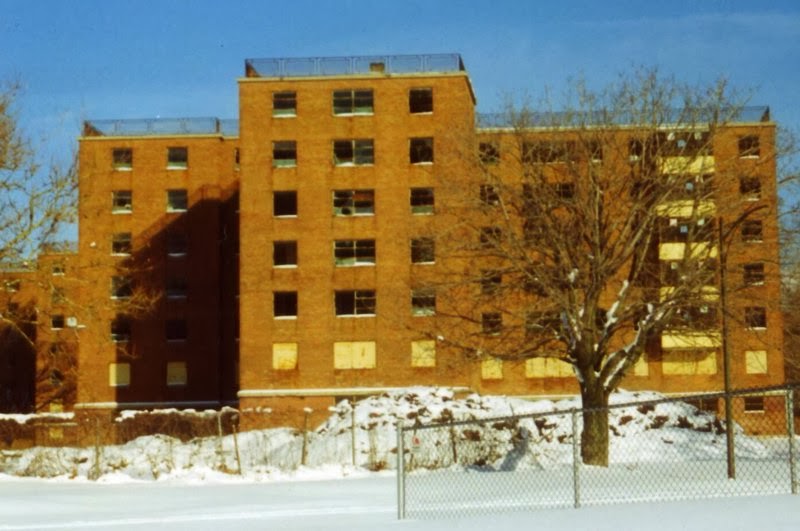 Posted by Ederik Schneider at 7:01 PM No comments:


The New Democrat on Facebook
The New Democrat on Twitter
This post was originally posted at FRS FreeStateNow on Blogger
When I think of poverty in America, I think about the worst aspects of poverty for people. First, not being able to afford a house or providing enough food for themselves and their families. I believe if we are going to win the "War on Poverty" in America we need to start there first, because low-income people or the working poor generally have a place to stay and, in many cases, jobs, and even in some cases enough food to eat, but are struggling to pay their bills, which is why they would be considered low-income.
So I believe winning the so-called "War on Poverty" should be a bottom-up approach rather then a top-bottom as we saw from the FDR New Deal in the 1930s and the LBJ Great Society of the 1960s, which were both top-bottom approaches to fighting poverty in America.  We are still fighting that war today over 70 years later, since the New Deal was created because of that approach. I want to put the focus on the people who are living in impoverished conditions and the local governments that deal with them daily and are on the scene so to speak and have the best ideas of how to handle the situation along with the people they serve. With this post about poverty in America, I'm going to focus on homelessness.
In America, the worst part of poverty is battling to survive every day, not knowing where the next meal is coming from or the quality of the food, or how long they must go between meals or worst, where they will sleep. Will they have to sleep outside and worry about being mugged?  Roughly 30 years ago, when homelessness started to become a big issue in America, mental patients were being released well before they were mentally capable of taking care of themselves. The approach to dealing with the issue was to put the homeless people in homeless shelters, where they could get a meal for the night and a place to stay for at most a few days.
But then they would be put back on the streets and back in the same position wondering where they were going to sleep that night or where their next meal was coming from. In the last few years, some local governments like those in San Antonio and Sacramento have taken a different approach. They've brought in homeless from the streets and into homeless shelters, given them a meal and a place to sleep, but then have helped them find jobs and apartments.  This is a much better approach, but it's expensive, especially in these tough economic times.
I want to create a nonprofit national organization that wouldn't be owned or run by the Federal Government or any other government but would be under the same regulations as any other nonprofit organization. Its sole purpose would be to move homeless people off the streets throughout the country and into what I would call housing centers, not projects located in bad neighborhoods.  They would be housing centers where the homeless could get food and a temporary place to stay.
They would also receive help with health care, education, and job training and finding their own place to stay and finally be on the road to self-sufficiency. At first this national organization to end homelessness would be owned by the Federal Government until it is up and running but be independent of the Feds with its own management, Board of Directors, State and local affiliates, and its own budget and finances.  It would be subject to the same regulations as any other nonprofit homeless advocacy group.
How would these Homeless Centers work?
Homeless people would either be recruited off the streets or walk into a housing center. They would get a health checkup, a meal, and a temporary place to stay in the housing center. Some homeless people wouldn't be mentally or physically capable of working and would need to be institutionalized. But those who are capable of working would be given ID and a background check to determine whether they have a criminal record and what, if any, is their professional background. Some homeless people might not have finished school and would be given the opportunity to return to high school to get their GED or diploma or given the opportunity to go to a junior college or vocational school to acquire the skills needed to get a good job and their own place to stay.
Once they finish their education, they'll be helped with job placement and housing placement.
How would these Housing Centers be financed?
Not by taxpayers, Federal, State, or local, at least not short term, but by the homeless people who consume these services.  Their welfare, disability Insurance, unemployment insurance as well as grocery and housing assistance will cover the costs. Once they leave a housing center, they would be obligated to cover whatever costs they still owe from their paychecks. Inside a Housing Center they will be given jobs to cover those costs.
For reasons that I've already laid out, we need a new approach to ending homelessness in America, an approach that actually empowers homeless people to become self-sufficient so they will be off the streets and self-sufficient going forward.

Posted by Ederik Schneider at 7:09 PM No comments: