The Lazy Cow: Rodney Dangerfield's Funniest Jokes Ever On The Tonight Show 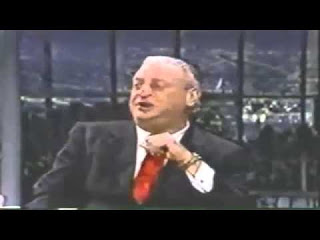 This piece was originally posted at The Daily Review: The Lazy Cow: Rodney Dangerfield's Funniest Jokes Ever On The Tonight Show

I'm not an expert on Rodney Dangerfield, but I believe this is his best performance on this show. This wasn't an interview at all. Johnny Carson, maybe asked Hot Rod one or two questions. And Rod just did his act with one wisecrack after another. Mostly about his wife and kids which might be why male comedians get married so they can have people they know really well that they can make fun of. Unless they're always on the road and when they're in town they mostly are just hanging out with their mistress and their bastard kids they're keeping a secret in some hell hole of an apartment, its their wife and kids that they know the best.

This wasn't Hot Rod's, 'I get no respect routine.' Where he goes off on some airline for giving his first-class seat away because he was five-seconds late for the flight. Or the great view of the bathroom that he gets when he goes to his favorite restaurant. This was his, 'my wife and kids routine.' Where he goes off on his wife Mary, for sleeping with other guys, because she has to have sex and every time she sees her husband naked she just laughs and can't performed adequately as a result. And his son Joe, for being so dumb and wild that he believes every time Joe goes out he needs a leash. So he doesn't run into doors, because he forgot to open them. And his daughter Sally, who sleeps with her teachers, because she's too dumb to do the work in school. And he did a great job.

Posted by Ederik Schneider at 6:40 PM